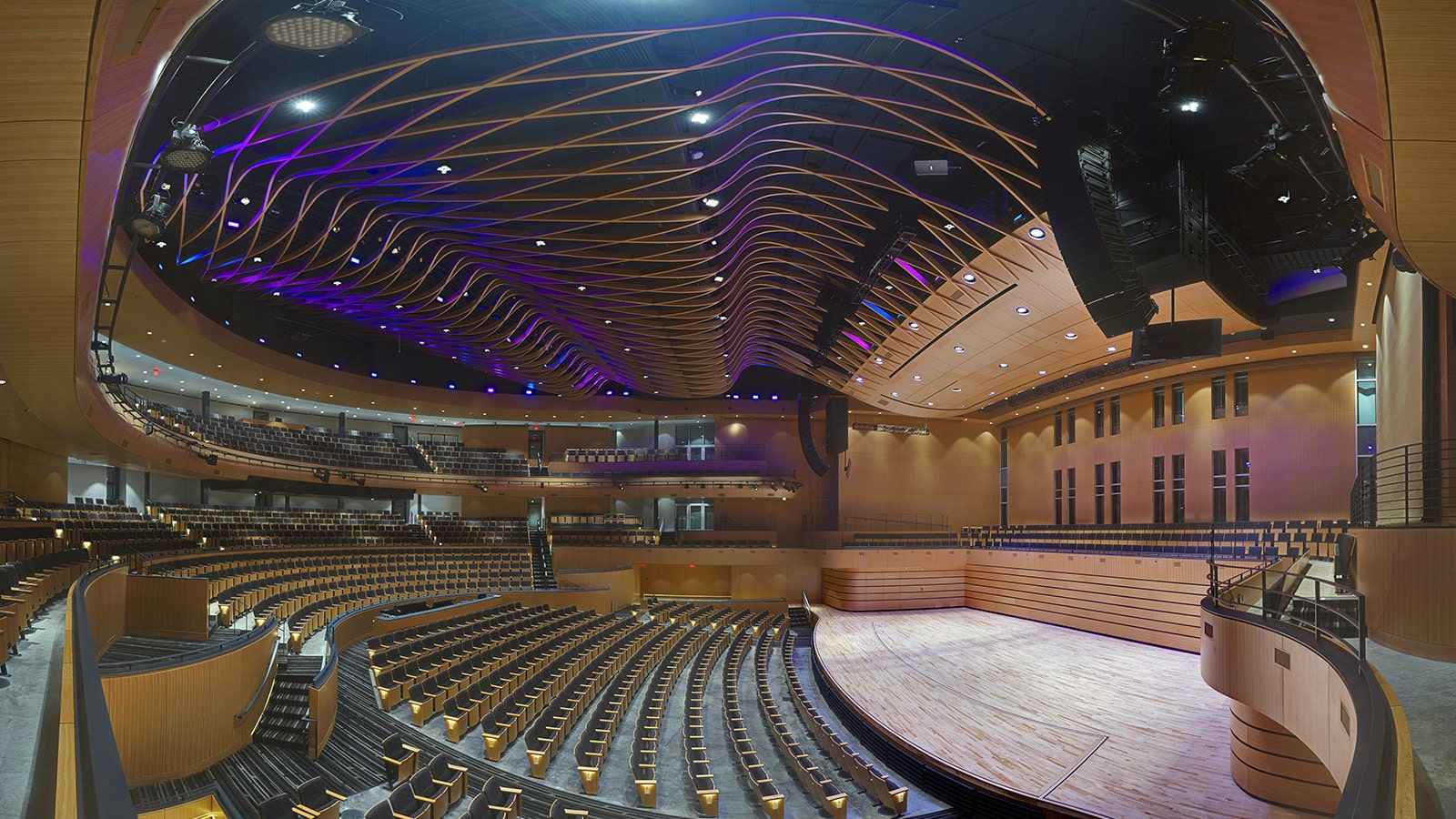 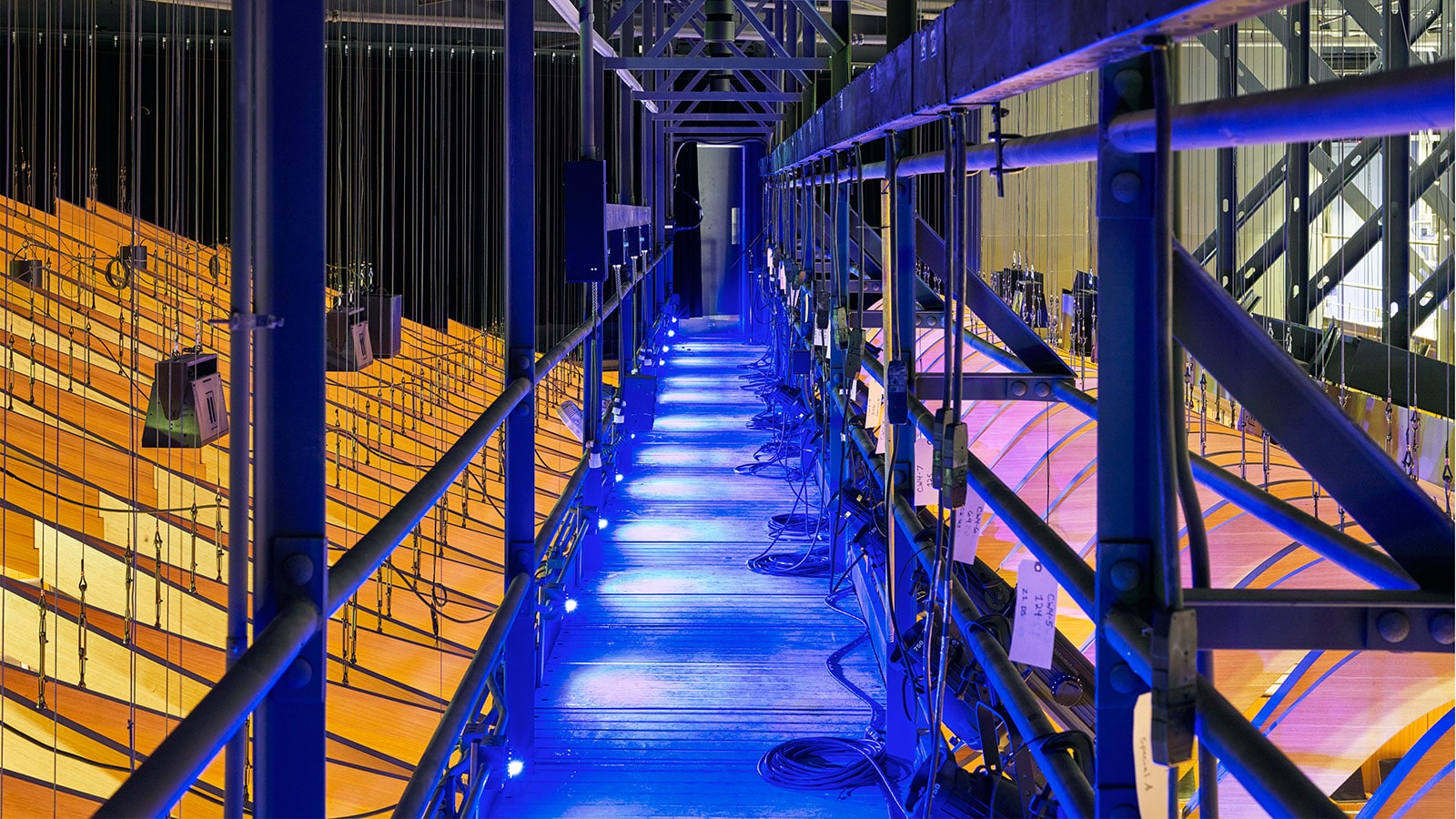 Ranked among the leading music education programs in the nation, Liberty University’s School of Music had committed to building a world-class venue for orchestral and choral music as the centerpiece of its new 141,000-square-foot Center for Music and Worship Arts. The Charlottesville, Virginia-based architecture firm VMDO tasked David Greenberg of Creative Acoustics (Westport, Conn.) with designing a hall that could deliver optimum response across a wide range of uses.

“Initially my brief was only to design a hall ideally suited for acoustical music performances, and I included adjustable architectural features to accommodate those uses,” says Greenberg. “But the hall also would be used by the School of Religion, with a program rich in amplified music styles ranging from ballads to rock. And it would be used for touring performances as well. That’s where Constellation came into the picture. I worked closely with Meyer Sound’s team to understand the capabilities of Constellation so the school could best take advantage of having both technologies at their disposal.”

Greenberg points out that having two adjustable systems working to complement each other affords unique opportunities for crafting aural environments. “A Holy Grail of acoustics is being able to precisely adjust the second order decay,” he says. “The reverberation gets out of the way so that the sounds you want to be clear and distinct are not covered up. Here, you can have the physical acoustic providing initial reverb decay, that dies off, and then you have the active acoustic continuing beyond that in a totally controllable fashion.”

The ultimate benefit, he continues, is greater flexibility. “Certain types of music will benefit more than others, but having the two systems together means the range of programs you can host with optimum response is much wider.” According to Michael Gerringer, AV architect and large public venue manager for the university, the turning point in deciding to build a “world’s-first” system came during a visit to Northland Church near Orlando, the first house of worship to be equipped with Constellation.

“Our music school dean, Vernon Whaley, fell in love with what he heard there and said we really need to have this in our new hall,” recalls Gerringer. The physical acoustics of the hall are altered using motorized drapes and vertical banners selectively covering wall areas behind the stage and around the perimeter of the auditorium.

The Constellation active component comprises 48 miniature microphones spaced around the hall for sensing ambient acoustics, together sending signals to a D-Mitri digital audio platform that includes four dedicated processors (one for each reverberation zone) that host patented VRAS acoustical algorithms. The resulting acoustical characteristics are created in the space by 303 compact loudspeakers and 18 compact subwoofers, also distributed throughout the hall to emulate the reverberant effect of reflective surfaces.

The system’s capabilities were given a workout for the annual “Christmas on the Boulevard” concert, with the school’s orchestra and choral ensembles performing excerpts from Handel’s Messiah in the first part of the program and, after intermission, a variety of numbers from popular holiday films and closing with traditional carols. “Everybody was in awe after that event,” recalls Gerringer. “It was astonishing what we could get out of that room.” Gerringer adds that the Constellation system “will give our students a greater knowledge of the technologies that are available in the real world. We can push the envelope of audio and acoustics, and that gives our students an edge when they go out into the workplace.”

In addition to events produced by the university, the new hall will host concerts by the Lynchburg Symphony and touring ensembles such as the Richmond Ballet, accompanied by full orchestra. “It will be open for all kinds of events that fit a 1600-seat footprint, including conferences, awards shows, perhaps even a presidential debate the next round,” says Gerringer. “With this acoustical flexibility, there’s really no limit to what we can do.” When direct amplification is required, the hall offers a house system based around a Meyer Sound LEOPARD compact linear line array system. “The LEOPARD arrays have performed beyond our expectations,” comments Gerringer. “They are clean and transparent, and perform well whether the sound deadening curtains are in or out. I’m an audio mixer myself, and I can hear things through the LEOPARDs that get lost in other PA speakers. They are like big studio monitors.”

Meyer Sound systems also are at work in 11 smaller performance and learning spaces throughout the new facility, including recital halls, choral and wind/symphony rehearsal rooms, songwriting and computer labs, and the guitar commons. A total of 39 Meyer Sound products have been installed in these areas, with the various systems comprising CQ-1 and UPQ-1P loudspeakers, UPJ-1P VariO loudspeakers, and Amie precision studio monitors as well as 500-HP subwoofers. Six MJF-210 stage monitors are available for use in the main concert hall.