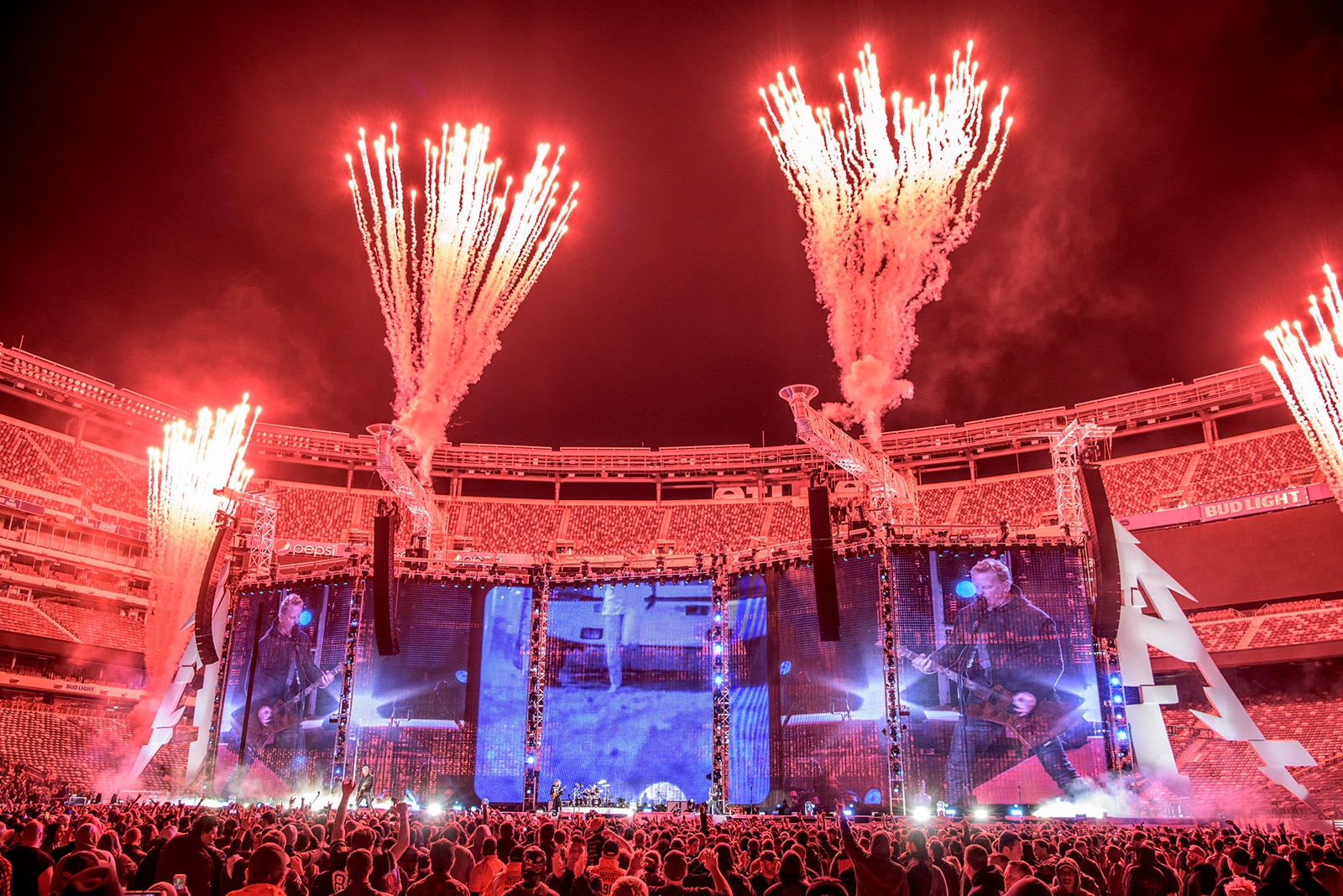 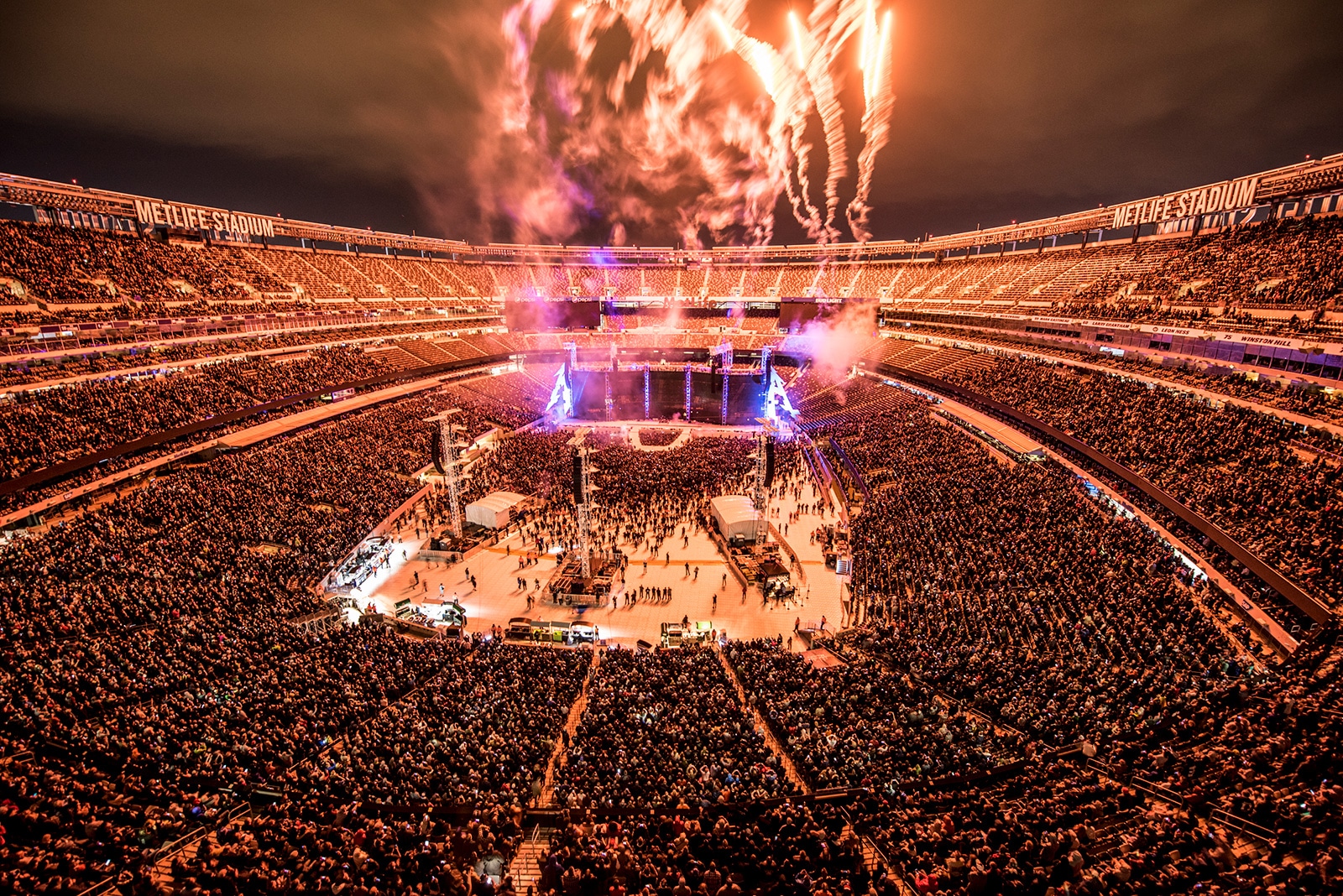 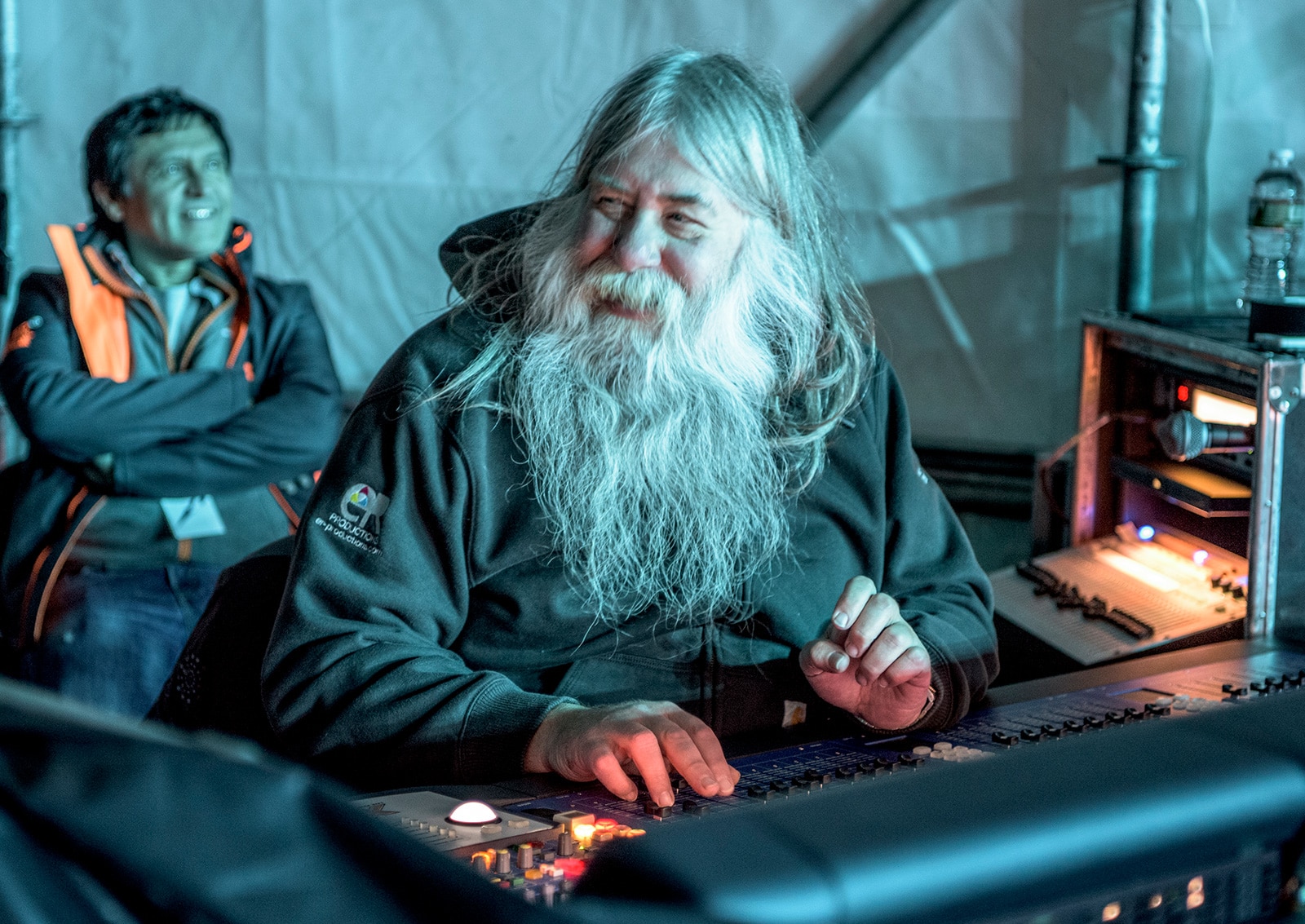 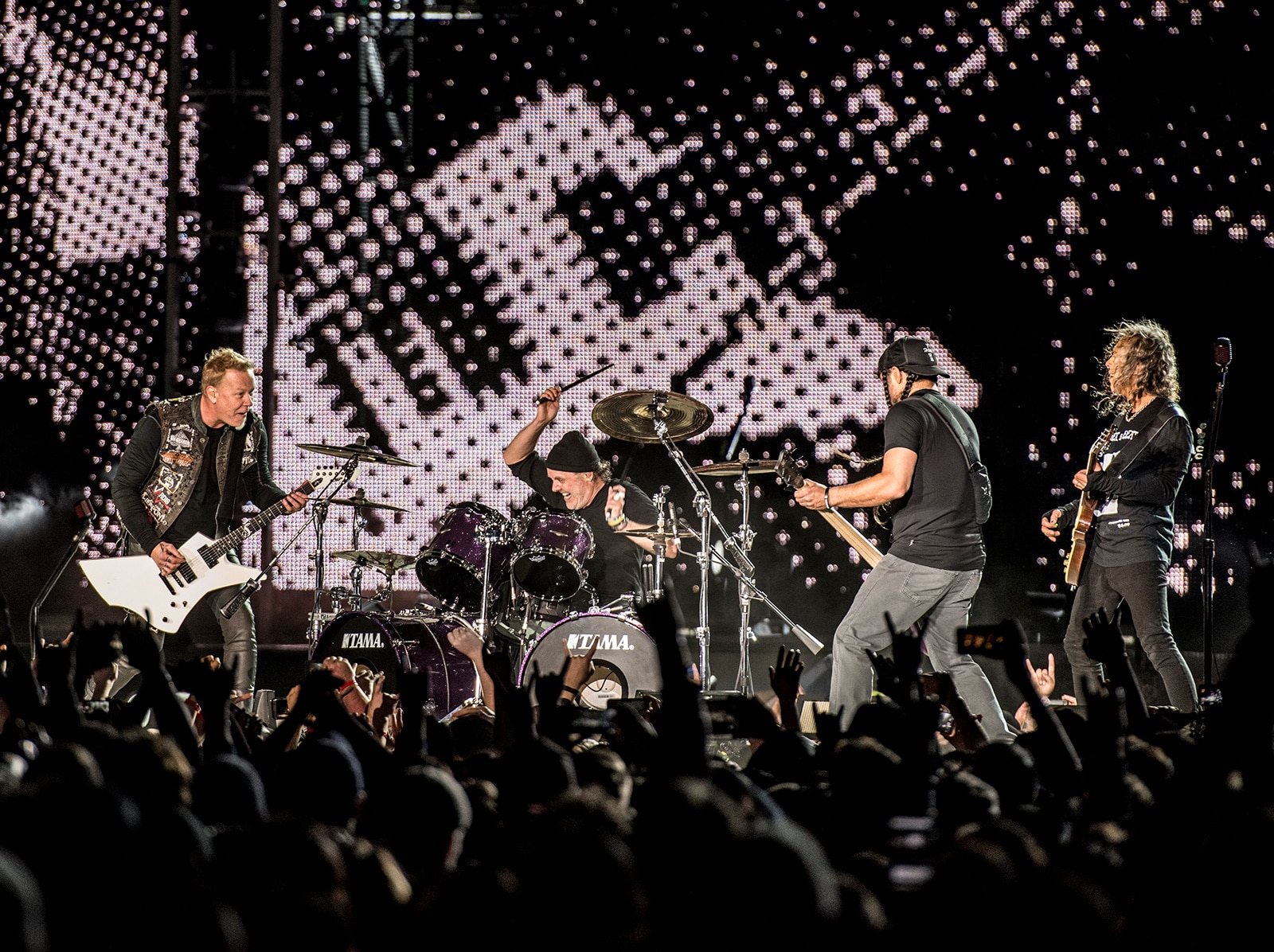 Corralling this formidable technology is the task of FOH engineer “Big Mick” Hughes, who has been at the helm of Metallica’s sound for 33 years of the band’s 35-year history. Over the past five years of intermittent tours and one-off events, Hughes has listed the LEO systems as first among his rider preferences.

“I just love the clarity of LEO,” he says. “It’s a very powerful box that produces a fantastic guitar and vocal sound. Also, having a two-way system, with the crossover point down where it is, keeps everything smooth and sweet in the mid-highs.”

Hughes also finds the system’s exceptional linearity to be a life-saver when he has to keep levels below cumulative SPL restrictions. “You can pick the volume you want and it doesn’t change tonally, unlike some other PA’s where you have to hold it in a certain sweet spot. It’s the easiest PA in the world to turn down when you have to.”

Making its global concert debut on the WorldWired tour is Meyer Sound’s new VLFC very low frequency control element, a devastatingly potent device that reproduces only a single octave – the one that spans the lower threshold of hearing – from 32 Hz down to 14 Hz. Two colossal end-fire arrays, each with 21 VLFC cabinets, produce an intense shock wave that can literally take your breath away.

“We use the VLFC’s as a special effect to create a realistic experience of an explosion, one that you feel in your chest more than you hear with your ears,” comments Hughes. “When they do the pyro for songs like One the VLFC arrays complete the visual effect. You have the flash of light and then you get the concussion of this massive subsonic wave. It moves a lot of air. You can definitely feel it.”

An even larger phalanx of 85 1100-LFC low-frequency control units, operating from 28 Hz to 90 Hz, handles the audible portion of the show’s deep bass. These are variously deployed as flown arrays, end-fire arrays beside the stage, and at the delay towers. The balance of the system, in the standard stadium configuration, is anchored by four main hangs of 18-each LEO line array loudspeakers. Covering the far end of the bowl are three delay towers, each carrying arrays of eight LYON-M main loudspeakers over eight LYON-W wide coverage loudspeakers. Twenty LEOPARD loudspeakers are spaced across the stage as front fills, with an additional 12 LEOPARD on the ground at the delay towers. A contingent of UPQ-1P loudspeakers is utilized as needed for miscellaneous fill.

The WorldWired Tour also boasts by far the most extensive implementation to date of Meyer Sound’s Galileo GALAXY networked platform. A total of 14 GALAXY frames and ten Extreme Networks Summit X440 series switches are interlinked via a redundant fiber optic network using the IEEE-developed AVB protocol. Both GALAXY and the switches have been certified for AVB standards compliance by the Avnu Alliance. The three GALAXY 816 frames at FOH serve as the hub, broadcasting streams to the GALAXY frames positioned near the main left and right arrays and at the three delay positions.

Prior to each show, the vast assemblage is meticulously aligned by VER system engineer Christopher Nichols.

All activity at FOH revolves around Big Mick’s favored Midas XL-8 console, with outboard support from a TC Electronic D2 delay, a vintage Korg DRV 3000 (for “Master of Puppets”), and a BBE Sonic Maximizer (for toms). A 10EaZy level monitoring system continuously occupies one of the Midas screens. On stage, vocal mics are Shure Super 55 Deluxe while Ulrich’s kit is captured by an assortment of DPA, Audix, Shure and Audio-Technica mics. Guitars are direct via Fractal Audio preamp-processors.

The summer stadium leg of the WorldWired Tour kicked off at M&T Bank Stadium in Baltimore on May 10 and wraps up at Commonwealth Stadium in Edmonton, Alberta on August 16. Of the tour’s 26 dates, 12 are in stadiums that host NFL teams, with the remainder in baseball or soccer stadiums, at festival sites or in other 50,000+ capacity venues. The one exception is the Nassau Veterans Memorial Coliseum, a smaller arena in which Metallica provided the grand re-opening festivities following major renovations. The tour resumes with a European leg of indoor arenas in September.